My Spy is an interesting one. Trailers for this movie emerged a fair amount of time ago – long before COVID-19 even started emerging in public consciousness – and quite what happened in between remains a bit of a debate. However, in continuing lockdown conditions, this action comedy has made its way to the small screen in the form of an Amazon ‘original’ – though posters at my own local cinema suggested it was heading to full release not too long ago.

In any case, things have obviously changed since then – and it’s good to finally see this fun flick finally head to audiences. While it might not seem to be too much on the surface – it’s an extremely easy watch and is one of few films I can safely say I’d pick up at any point if struggling with cinematic inspiration. It’s certainly not going to challenge any of the great action films, but it’s a nice diversion. 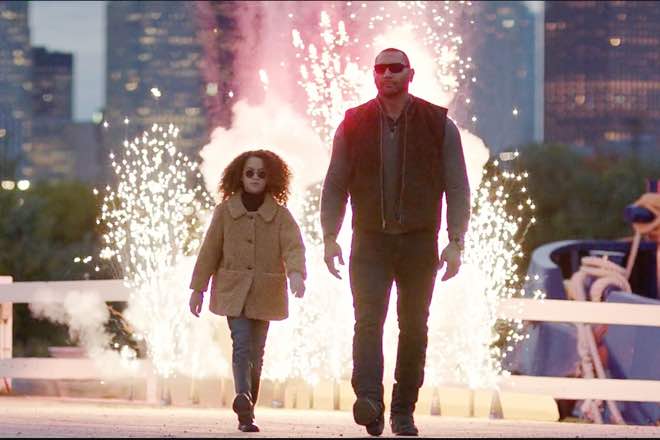 JJ (Bautista) is a hardened CIA man who finds himself thrown into a safeguarding mission with geeky tech whiz Bobbi (Schaal), forced to keep a close eye on a mother and daughter at risk of being intercepted by some particularly nasty international baddies. However, the daughter in question, Sophie (Coleman) wises up to wire-tapping and cameras in her home, and nearly compromises JJ and Bobbi’s mission – that is, until JJ agrees to help Sophie at school and at the local ice rink. What transpires, of course, is a script which sees the characters growing closer, while the mission at stake gets ever more tense. How will it all end up?

You can probably guess. Let’s start by getting this out of the way – My Spy rides on a cliché and a script that’s pretty paint-by-numbers simple. This is a story which I’m sure I’ve seen in one form or another at least twice elsewhere, meaning that it’s hardly going to challenge many grey cells. However, where the movie bounces back, of course, is in the way that it tells the story.

My Spy benefits from decent pacing and a cast who genuinely seems to be getting into things – even if it’s not the most fascinating of material to work with. Bautista continues to prove that he is fast becoming the king of action comedy, with Stuber and his work as Drax in the MCU helping to cement his name in this regard in recent years. He seems to be the go-to-guy if you need someone a bit thick around the emotions as well as the muscles, with hair-trigger impulsivity to boot.

The script, on the whole, might not be original, but it is at least funny. I do think, again, it’s comparable to Stuber in this regard. My Spy is likely to get buried thanks to its sheer appearance as a daffy comedy with a concept that you or I could come up with. However, the pacing, and the sense of fun that propels the script, are enough to keep your eyes on the screen – while the cast, largely, keeps you invested.

My Spy’s strengths lie in the fact that, for the most part, it plays it safe. It doesn’t try any jokes or moments which are too daring or too desperate. It seems to know when to make a joke, and when to make a joke work. There are far too many movies out there – let’s say, The Happytime Murders – which spend an inordinate amount of time desperate for you to love it, to laugh at every second frame. Yes – My Spy is likely to appeal tepid to some people who consider themselves comedy connoisseurs, but the jokes here are well-crafted, and even better, they are well-timed. Bautista is fast becoming one of my favourite comic actors in this regard – and I do hope he continues to find work in this vein. I’m perfectly fine with other WWE stars such as Dwayne Johnson taking on the charismatic meathead roles – and John Cena raking on characters who are well-built, but definitely awkward.

Ok – I’m done lauding Bautista at this point – but the movie does revolve around him. My Spy is a film I will choose to watch again without much decision-making – though it’s likely to not be the centre of many people’s movie nights. This is a pretty sad fact, but with a little more originality and a little more risk – taken in a calculated manner – it could have struck out for that extra .5 rating.

As it stands, My Spy is certainly better than other critics are telling you it is, though just don’t expect it to bring any kind of big changes to the way you see comedic cinema. There are much better movies out there – but My Spy does what it sets out to do, and it’s successfully funny along with it.